A way out of the periphery

An essay on Croatia in the new international order

The book A way out of the periphery. An essay on Croatia in the new international order is the second title by Davor Ivo Stier published by TIM Press. This book uses a very clear, precise and comprehensible vocabulary to analyze the key issues of Croatia's foreign policy positioning, how the state and society should be oriented, how to react to global challenges and how to achieve (strategic) partnerships and be aware of global and regional competition in Southeastern Europe. Since we live in a new geopolitical paradigm (which this book deals with), this work is extremely important because it offers an authentic view of Croatia's foreign policy and global positioning and is therefore mandatory reading for a better understanding of Croatia's position in international relations.

The Euro, Schengen or the Organization for Economic Co-operation and Development by themselves do not mean solving all political and economic weaknesses. However, they are especially important for Croatia in order to avoid a long-term stay on the European periphery. Namely, at the moment of the order change, if the European process of fragmentation is not stopped, there is a danger of a much stronger implementation of the concept of the European Union at different speeds. In such a geopolitical architecture of concentric circles, the differences between the center and the periphery can only increase.

Davor Ivo Stier's book A way out of the periphery is a relevant work that questions the position of Croatia in the European context and deals with the position of the Croatian state and society in the new recent geopolitical realignments, offering a very high-quality analysis, but also concrete proposals for where society and the state should be directed. The book represents an extremely valuable, authentic contribution to science and the profession in the field of international relations, geopolitics, diplomacy, sociology, political science, law and economics.
Goran Bandov

The title of the essay reveals the main value of this work, in which the author points to Croatia's possibility to not only maintain itself as a sovereign state in the creation of a new world order, but to move from the margins of European political and modernization processes in which it has remained for centuries to the center of events.
Gordan Črpić

Davor Stier's inspired essay, written in the hand of a seasoned diplomat and politician, comes at just the right time. Its main goal is to trace a bridge by which Croatian foreign policy can step out of peripheral relevance into European and global relevance. In this attempt, he takes a big leap, going far into the past so that the cognitive reflection towards the future is greater and the landing is further. At a time of huge changes in international relations, the author firmly and well-groundedly claims that Croatia can notably strengthen its foreign policy position and significance.
Vladimir Drobnjak

Davor Ivo Stier
After two successive paradigms, state-forming and Euro-Atlanticism, Croatia is facing a new challenge: the opening of political and economic institutions as well as social development. With social... 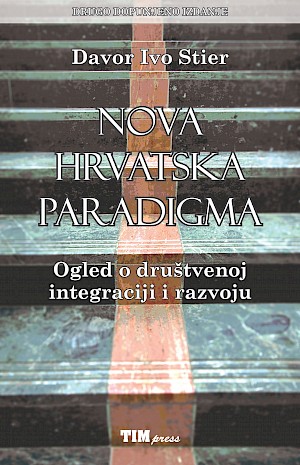 Davor Ivo Stier
After two successive paradigms, state-forming and Euro-Atlanticism, Croatia is facing a new challenge: the opening of political and economic institutions as well as social development. With social...